Andris Leimanis was born in Riga, Latvia in 1938. After numerous life experiences his family arrived in Canada in 1965. Very early he showed talent for art and eventually worked for design firms in Toronto and Montreal as an illustrator and creative director. In 1974 he graduated from Loyola College (Concordia University), in Montreal with a B.A. degree cum laude while studying with various R.C.A. professors. In 1976 he received a Masters of Fine Arts from Syracuse University in New York State. Eventually he decided to paint full time as a fine artist with several galleries in Montreal. He experienced unusual success with his poetic depictions of Montreal with sell out shows with Galerie Bernard Desroches in Montreal, and city scene solo shows at Kar and Kaspar Galleries in Toronto. After visiting several world renowned gardens in England and France, he created garden scenes for exhibitions in Boca Raton, Florida and Carmel, California. While developing these paintings, he continued to collaborate with other galleries in Quebec City, Ottawa, Calgary and Edmonton Canada. Leimanis has had more than a dozen solo exhibitions and participated in an equal number of group shows. 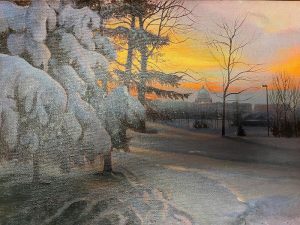