“Born in Egypt in 1948 to Armenian parents, Armand Tatossian in an internationally recognized artist. His grandfather was an artist and curator at the Alexandria Museum of Egypt and had a strong background to lay the groundwork of his artistic career. With his guidance he began to draw. He had also taught his son to paint, who continues to work as a landscape artist in Canada. Armand Tatossian’s great uncle was a painter as well, which also served to solidify his foundation in fine art. It was evident there was no other course in life better suited for this man.

In 1965, he dedicated himself to painting full time, which allowed him to travel and exhibit his work internationally. The following year, he studied under the guidance on Serbian sculptor Jose Majzner. Always seeking further inspiration and guidance, Tatossian then worked under Adam Sheriff-Scott restoring many of his earlier mural works. He was not paid, but what he learnt from Sheriff-Scott was infinitely more valuable than any sum of money. He eventually became his assistant, and drove the artist around on several artistic adventures, where he was introduced to several formidable artists such as Goodridge Roberts, A.Y. Jackson and Stanley Cosgrove.” 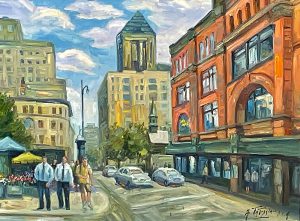 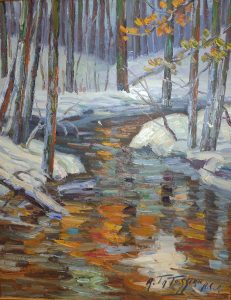