Painter, muralist, draughtsman, Stanley Morel Cosgrove was born in Montreal in 1911. He studied art at the Ecole des beaux-arts of Montreal from 1928 to 1935 and afterwards in 1936 at the Art Association of Montreal where he took figure painting under Edwin Holgate. He enjoyed the rare honour of being invited to exhibit, while still a student, at the Provincial Museum of Quebec in 1939. About this time, he was following the work of French painters like Braque and Rouault. He received a scholarship from the Province of Quebec in the earlier part of the year and had the intention of studying in France for four years but the outbreak of the Second World War changed his plans. He was allowed to study on the American continent and he choose New York. He arrived there with his wife but after two months found it
unsatisfactory and finally went to Mexico. There he studied at the Academia Nacional de San Carlos in Mexico City in 1940 and became interested in fresco painting and approached Jose Clemente Orozco. Orozco who had just begun a fresco for the Hospital Jesus de Nazareno in the art of Mexico City agreed to let him help with some parts of the work. It was from working with Orozco in Mexico City that Cosgrove felt a new assurance and directness not experienced in his previous work in 1942-43. In 1953 Cosgrove was awarded a Government fellowship to study in France. He was active about 1953 in the field of textile designing, working with a group of artists which included Paul-Émile Borduas and F.C.A.

Sullivan. He had also worked for wider interest in modern fresco painting in Canada, particularly in churches, and he conducted classes in this medium at the Ecole des beaux-arts. He completed a fresco for the entrance of the philosophy and science wing of the College de Saint Laurent near Montreal. He taught at the Ecole des beaux-arts from 1944 to 1958 and at Queen’s University in Kingston in Ontario in 1952. 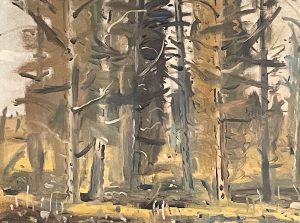